Who does what? The global governance of international security

The most recent national security strategies of the permanent members of the United Nations Security Council, as well as those of the G7, E7 and BRICS countries, all coincide in identifying the use of force, the proliferation of weapons of mass destruction (WMDs) and terrorism as direct threats to their security. States have long cooperated at the regional and global level to minimize these threats. When examining how this global governance is structured, both similarities and differences between the governance architectures of the three threats stand out.

The use of force is arguably the most complex of these threats to govern, for two main reasons: first, its governance architecture has been developing for more than seven decades, as it is the oldest and most pervasive security threat; and second, because conflicts are phased and an ever-increasing number of actors are involved in each phase. For its part, the global governance of WMD proliferation is the result of over sixty years' worth of efforts to fight a threat that remains present, and it relies on the involvement of a high number of actors. The fact that the three types of WMDs (nuclear, chemical and biological weapons) do not form an integrated regime increases the complexity of the governance architecture. Regarding the threat of international terrorism, it could be argued that the governance of counter-terrorism is relatively young and underdeveloped – at least compared to the aforementioned architectures. Although global responses to international terrorism started appearing as early as the 1960s in the shape of legal conventions and protocols, 9/11 marked a clear turning point in the development of the governance architecture.

Our study shows that a point of convergence for all three architectures – compared in the table below (see Figure 1) – is that Formal Intergovernmental Organizations (FIGOs) remain relatively central. However, the weight of global FIGOs compared to intercontinental and regional ones varies from case to case In the use of force architecture, intercontinental organizations such as NATO and regional organizations such as the African Union, Association of Southeast Asian Nations (ASEAN) and the Economic Community of West African States (ECOWAS) are fundamental but they are subordinated to the United Nations, given that they cannot employ military force in regional conflicts without explicit authorization from the UN Security Council. In WMD non-proliferation efforts, intercontinental and regional FIGOs are comparatively less important when compared to the International Atomic Energy Agency, the UN and the Organization for the Prohibition of Chemical Weapons. On the contrary, in counter-terrorism efforts, regional FIGOs like the Shanghai Cooperation

Organization, the European Union and the Organization of American States will continue to be the key actors, unless states agree on a common and universally accepted definition of terrorism to propel forward common global counter-terrorist strategies. 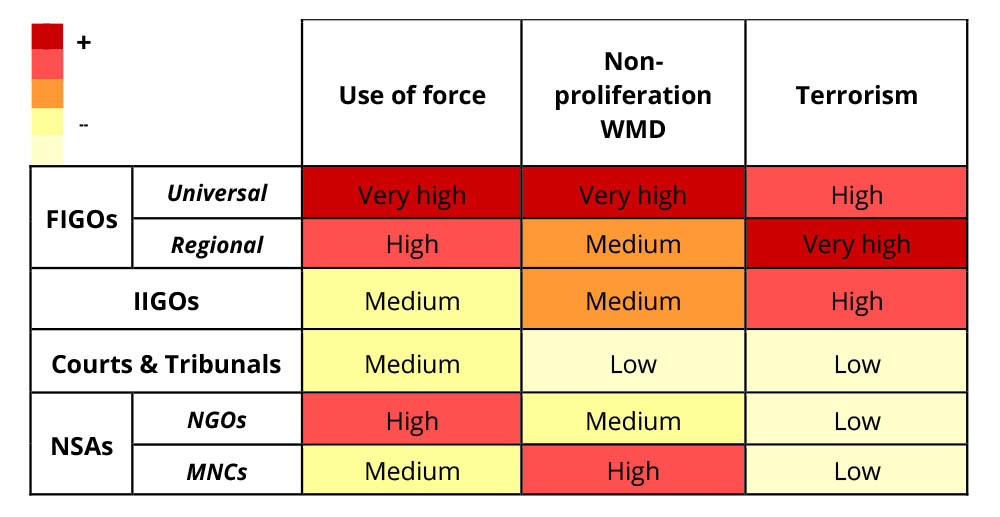 The color-coding expresses the relative weight of each type of actor compared to others within each governance architecture. The darker the color, the more present the actor is

Informal Intergovernmental Organizations (IIGOs) hold a considerably different role in the three governance architectures. In non-proliferation, informal intergovernmental arrangements have traditionally been crucial, especially in standard-setting for export controls. In this context, multilateral export control regimes like the Nuclear Suppliers Group, the Wassenaar Arrangement and the Australia Group are critical in the harmonization of conditions to strategic trade. International contact groups (ad hoc informal international organizations that are sometimes established for resolving a specific temporary conflict, normally composed of states and established when the Security Council is unable or unwilling to act)  like the 6-Party talks (on North Korea) and the P5+1/EU3+3 (on Iran) have been particularly active in specific situations where nuclear proliferation is suspected or actually occurring. In the counter-terrorism field, IIGOs have also proliferated in number and increased in importance, as they facilitate intelligence-sharing and contribute to capacity-building and to the fight against terrorist financing. IIGOs dealing with counter-terrorism appeared mostly after 9/11; however, various pre-existing IIGOs working on other matters (such as G7's Financial Action Task Force) also expanded their original mandate to deal with counter-terrorism. This category of actor is thus increasing its relevance and continues to be key within the counter-terrorism architecture. The use of force, however, is still primarily managed by FIGOs, with the exception of certain ad hoc contributions by the G7/G8 or international contact groups like The Quartet (in the Israeli-Palestinian peace process), the Contadora Group  and other fora that emerged in the framework of concrete conflicts. At this point, we should note that there is still an important gap in the study of the interplay between formal and informal security IGOs, unlike in other fields like trade and finance.

Notwithstanding their limitations, international courts and tribunals such as the International Court of Justice (ICJ) and the International Criminal Court (ICC) may have jurisdiction in contentious cases and on occasion, they condemn the illegitimate use of force by states, and prosecute individuals for serious crimes like genocide, war crimes and crimes against humanity. In non-proliferation, on the contrary, they play a marginal role – save for the well-known ICJ Advisory Opinion on the Legality of the Threat or Use of Nuclear Weapons. In terrorism, no permanent court had been given jurisdiction until very recently (thanks to Article 28G of the Malabo Protocol, the African Court on Human and People's Rights is set to become the first permanent international court to have jurisdiction over the crime of terrorism; the Special Tribunal for Lebanon (UNSC Resolution 1757 (2007) is the only international tribunal with express jurisdiction over terrorism-related offences, although there are some more adh hoc international courts which also foresee some provision for terrorism-related offences like the Statute of the Special Court for Sierra Leone (art. 3d), or the Statute of the International Criminal Tribunal for Rwanda (art. 4d)). The relevance over international courts and tribunals is thus fairly low throughout the security architecture, in spite of having the potential to play an important role in the reestablishment of peace and security.

With regards to non-state actors (NSAs), there is also significant variation in their roles in governing the three threats. Many different types of NSAs (NGOs, epistemic communities, social movements, multinational corporations and private military and security companies) can be studied, but not all of them have the same presence and relevance in the fight against the three threats. Turning to the category of NGOs, in the use of force and conflict management, both operational and advocacy NGOs are crucial during all three conflict phases (the pre-conflict period, which could be described as a situation of fragile peace; the conflict period, which starts with low intensity violence that may escalate to a full-blown conflict; and the post-conflict peace-building period), whereas in non-proliferation efforts, only advocacy NGOs are actively engaged. Their role, however, should not be underestimated: examples such as ICAN and Global Zero have proved that advocacy networks are in certain cases able to garner enough support to mobilize UN action and promote the negotiation of legally binding treaties. In counter-terrorism, meanwhile, operational NGOs play only a minor role.

As for multinational corporations (MNCs), they are important in all three architectures but to varying degrees. The self-regulation of companies is vital for the functioning of export control regimes regulating nuclear, chemical and biological dual-use goods used for the proliferation of WMDs, and they can also play a role in the fight against terrorist financing. However, the contributions of MNCs to conflict management are somewhat less direct and clear. By participating in multi-stakeholder initiatives for increased transparency and delivering on corporate security responsibility, MNCs can play a structural role in conflict prevention.

Ana Sánchez Cobaleda is a post-doc researcher in international security at Esade's Center for Global Economy and Geopolitics. She is a GLOBE Research Fellow at EsadeGeo.