Towards a global agreement on sustainable bioeconomy: Is the G20 the alternative?

Amid the global crisis unleashed by the pandemic, the G20 summit organized by Saudi Arabia was held and, for the first time, in a virtual format. The leaders of the twenty most developed countries of the global north and south met once again to coordinate policies to face not only financial but also environmental and social problems. On this occasion, the spread of COVID-19 to all corners of the earth put on the table a new form of threat to global economies with a manifesting impact on the health and lives of citizens as well as also in employment, poverty and inequality. In this context and in the process of broadening the Group's agendas, the G20 reflects the need for global coordination regarding increasing issues and problems. Bioeconomy agenda has only just been recently included in the discussions of the Group and opens the door for reflection upon the possibilities that coordination and global commitments may have for promoting more sustainable development modes. Experts on the subject agreed on the need to settle priorities and evaluation mechanisms at a global level to calculate the weight that bioeconomy has in global economy (El-Chichakli et al., 2016). This was also reflected in the bioeconomy Experts’ Survey carried during the Global Bioeconomy Summit 2020 where the need for greater coordination in international trade and development policy is manifested by dealing with the gaps in the governance of the bioeconomy (Global Bioeconomy Summit, 2020).

The G20 brings together the main agricultural exporters in the world, concentrates the largest traders of commodities, and the larger producers of biofuels (whose production and use has been promoted by governments through national policies and strategies). However, the bioeconomy per se was not incorporated as part of the global economic agenda until the 2018 summit in Buenos Aires, Argentina, and, most recently at the summit in Saudi Arabia. Most of the bioeconomy-related issues have been present in the group through the promotion of specific global agendas such as sustainable development, climate change, food security, sustainable agriculture, and bioenergy. Thus, as part of its global commitments, the group maintains an agreement in the effort to achieve the goals established by the Sustainable Development Goals (SDGs) through the creation, in 2010, of the Development Working Group in Seoul (G20, 2010). The inclusion of the development agenda opened the possibility of thinking about development as a global public policy (Kloke-lesch, 2015) and gradually incorporating agendas outside the merely financial ones. Since the Turkish presidency incorporated sustainability as part of development in 2015, the G20's work on development has been changing and expanding as the global agenda demanded, with the aim of contributing to the provision of global public goods and supporting the integration of developing countries to a sustainable global economy. The new report prepared in 2019 shows the increase in the group's actions in the various sectors of sustainable development (OECD, 2019). 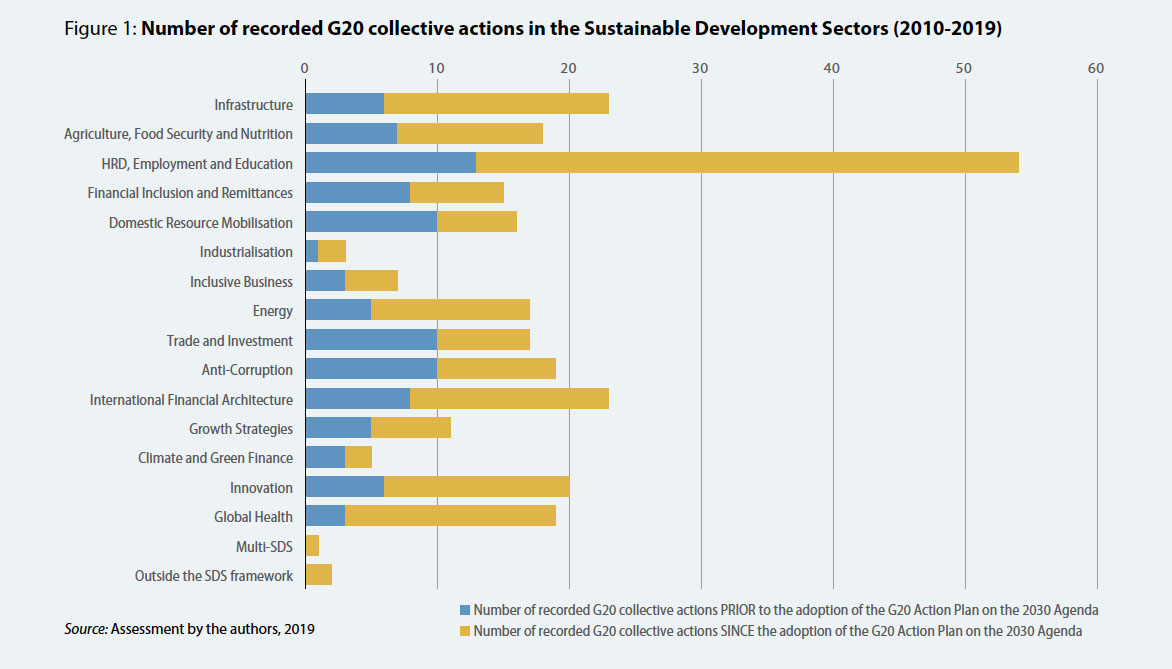 The sustainable development agenda brought with it the inclusion of other agendas related to the bioeconomy. Food security was included on the agenda in 2010 by France, generating optimism about the possibility of developing common policies in the face of the food crisis,  and consequently the volatility in food prices and disputes over access to food for countries more dependent of international market prices. However, it failed to advance in these objectives as it was expected, focusing on ‘palliative’ measures to the food governance system rather than generating proposals that would address a restructuring of the regulatory framework that protects developing countries from external shocks and volatility in food prices (Clapp & Murphy, 2013). Hence, biofuels policies from which the debate of food vs fuels emerged, were addressed marginally and without much detail. The bioenergy agenda was incorporated in 2016 at the summit in Hangzhou, China, in collaboration with the International Renewable Energy Agency (IRENA) and other organizations such as IEA Bioenergy with the aim of supporting the implementation of the Global Bioenergy Partnership (GBEP) and its sustainability indicators to promote the use of bioenergy. However, progress has not yet been made that would allow to glimpse beyond good intentions and declarations and the possibility of coordinating common commitments (Bastos Lima & Gupta, 2013).

The bioeconomy was incorporated into the G20 agenda at the Buenos Aires, Argentina summit in 2018. The discussion took place within Think 20 (T20), led by academics and officials from Latin America who were part of the specialized group on Food Security and Sustainable Agriculture. As a result, many postulates of bioeconomy related to sustainable agricultural production were incorporated in the final document of the T20 (T20, 2018) and the official declaration of the meeting of Ministers of Agriculture, noting that “bioeconomy, based on the responsible use of natural resources and the conversion of agricultural waste streams into value-added products, can potentially contribute to the achievement of food security and can also be used effectively to develop rural spaces and economies. Therefore, we underline the importance of the development of bioeconomy for the effective implementation of productive systems that guarantee the sustainable use of the land” (G20, 2018, p. 6).

This first impulse led to a new proposal also promoted from Latin America (mainly Argentina), for the formal inclusion of the issue on the agenda. Thus, for the Saudi Arabian summit, a document was prepared within the framework of the T20 for the promotion of bioeconomy as a way to achieve the SDGs (Chavarria et al., 2020). The proposal refers to the need to develop a shared global framework for the development of national bioeconomy strategies, focusing on three specific lines of action: 1) an agreement of guiding principles for the development of global bioeconomy policies, 2) a framework of reliable bioeconomy indicators; and 3) an effective platform for knowledge management in bioeconomy (Chavarria et al., 2020).

1. Coordination of efforts to share and disseminate information and experiences

The first proposal lies in the need to share information and experiences on bioeconomy to achieve more effective policies and investments for its development. Development banks take a central role here, especially for lower-income countries, which are, at the same time, leaders in many sectors of bioeconomy. In this task, the G20 could be a platform from which to bring together experts in bioeconomy policies and sustainable development that will serve to promote the sustainable bioeconomy at a global level and in a coordinated manner.

2. Reliable bioeconomy indicators to guide decision-making and investment, and monitoring of progress towards goals

Given the lack of measurement mechanisms that allow quantifying and comparing the various national bioeconomies, the second proposal lies in developing a harmonized system of definitions and measurement of the bioeconomy coordinated at a global level. This would allow having greater and better knowledge about not only the impact of bioeconomy on countries’ economy but also its impact on other sustainability indicators to meet the SDGs.

3. Synthesize good practices for the development of public policies in the bioeconomy

The third proposal aims to strengthen national bioeconomy strategies of the G20 members to promote their development at the global level. For this, it would be necessary for the G20 to lead a consortium of international cooperation organizations for the preparation of a document of good practices for the development of public policies in the bioeconomy. This would collaborate with the transition towards a more sustainable development model based on the experiences of many of its members and that allows for identifying the potentialities and public policy opportunities of each country for the development of the bioeconomy.

These three proposals serve as a starting point to think about global coordination opportunities on bioeconomy and how these instances can be used to promote more sustainable production models but that, in turn, recognize the differences between countries, their potentialities and also needs. The G20 may emerge as a platform for that goal. Despite the variety of criticisms that the forum has received regarding its enforcement capacity or to make substantial changes in policies, the existence of coordination mechanisms in these agendas serves as an impetus for parallel negotiations that arise from the global instance itself. Global governance may not be the solution to everything, but some agendas can strongly benefit from it to gain momentum. The Italian summit in 2021 will be a new platform to observe the advancement of a global agenda in sustainable bioeconomy and a new opportunity for the countries of the region to promote central issues for their economic development.