2020 is just a few days old, but we have already faced a number of events shaping world affairs in unexpected and uncontrollable ways. International relations are still dominated by headline news and singular decisions by powerful actors. However, in the 21st century, the governance of world affairs is much more complex and multifaceted than it seems: A varied set of actors is engaging in global rule-making through formal and informal processes. Traditional intergovernmental organisations and processes are complemented, substituted or antagonized by informal international law-making, private rule-making and public-private initiatives.

Acknowledging these trends, global governance has emerged as both an organisational principle in international relations as well as an analytic approach through which those complex relationships can be studied. The growing body of global governance scholarship is increasingly turning to the quantification and empirical measurement of such actors, e.g. mapping formal or informal organisations and transnational networks or public-private initiatives.

The GLOBE project, which was established to shed light on the EU’s role in global governance, has now collected 100 data sets for the study of global governance. By that, we mean data sets with a clear international dimension, measuring global activities, actors, or outputs, and linkages among states. It also includes country data on issues with a direct impact on global issues (as in security or finance), and measurements of states’ interactions. The list includes metadata, i.e., collections of various databases as well as specific data from a range of sources such as universities, government agencies, international organisations (IOs), and non-governmental organisations (NGOs). The sample is by no means comprehensive, but we focused our analysis on the 100 data sets that we consider the most relevant and impactful resources publicly available today.

In this blog post, which strongly builds on GLOBE´s First Policy Brief (Globe 2020), we present an overview of the topics, features, and agents they cover. In the following, we will provide an overview of these data sets. To do so, we first consider their distribution between two dimensions: (1) focus and (2) scope. By focus, we mean the main topic or domain investigated by the data set. By scope, we distinguish between a narrow scope (specifically studying global governance phenomena) and a broad scope (indirectly studying global governance phenomena). We then take a closer look at those data sets falling within the narrow scope, analysing the different features and agents of governance that they cover. Lastly, we draw conclusions on the reviewed data sets and point out information gaps.

The GLOBE project is clustered around topical work packages (trade, development, security, migration, climate change, finance). Of the 100 data sets listed by GLOBE, 61 data sets fall within these specific topics or domains. Of the remaining data sets, five deal with topics that are not within GLOBE’s focus (e.g., culture); three are cross-sectoral; and 31 cover general, non-topical aspects of global governance (figure 1). 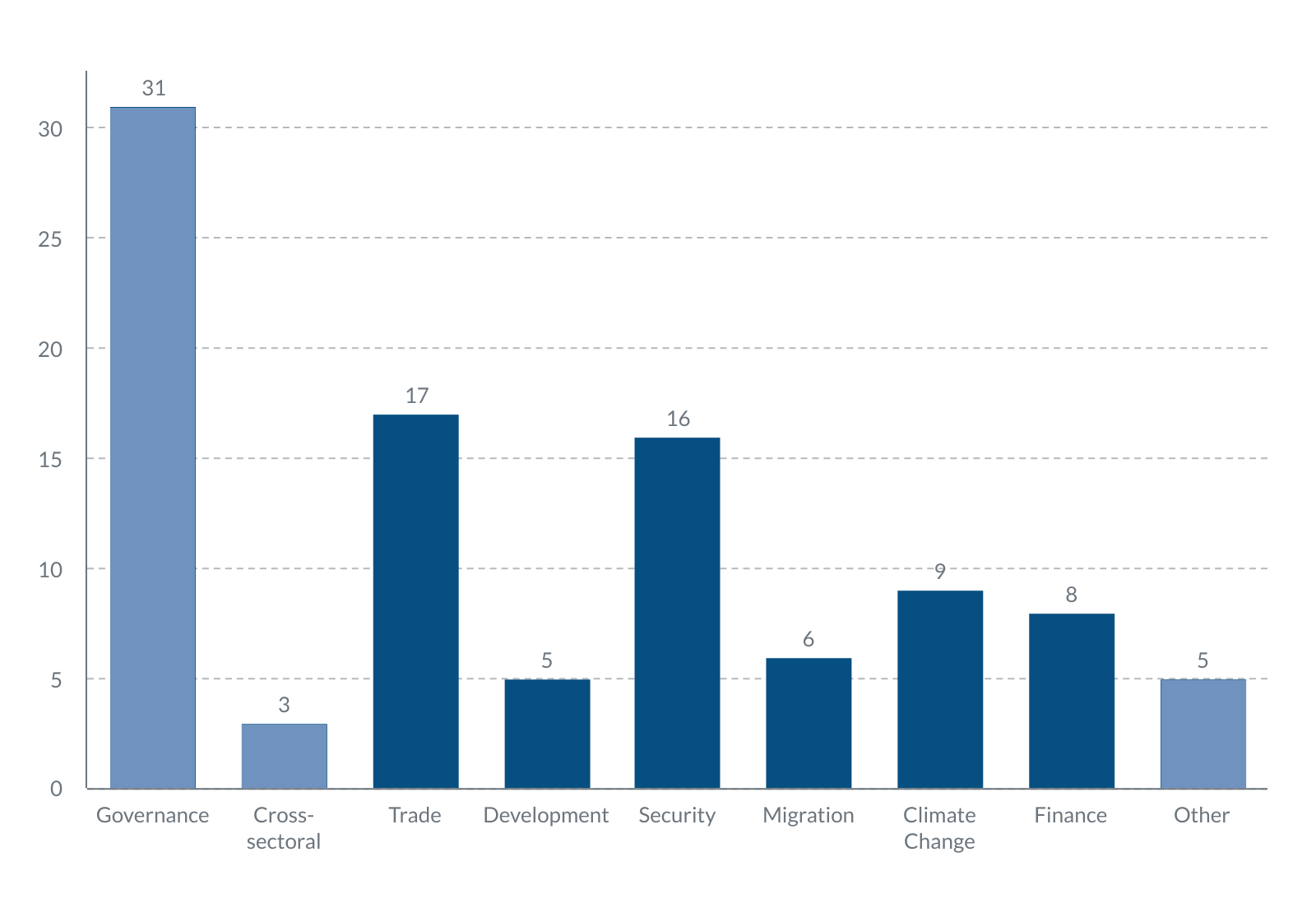 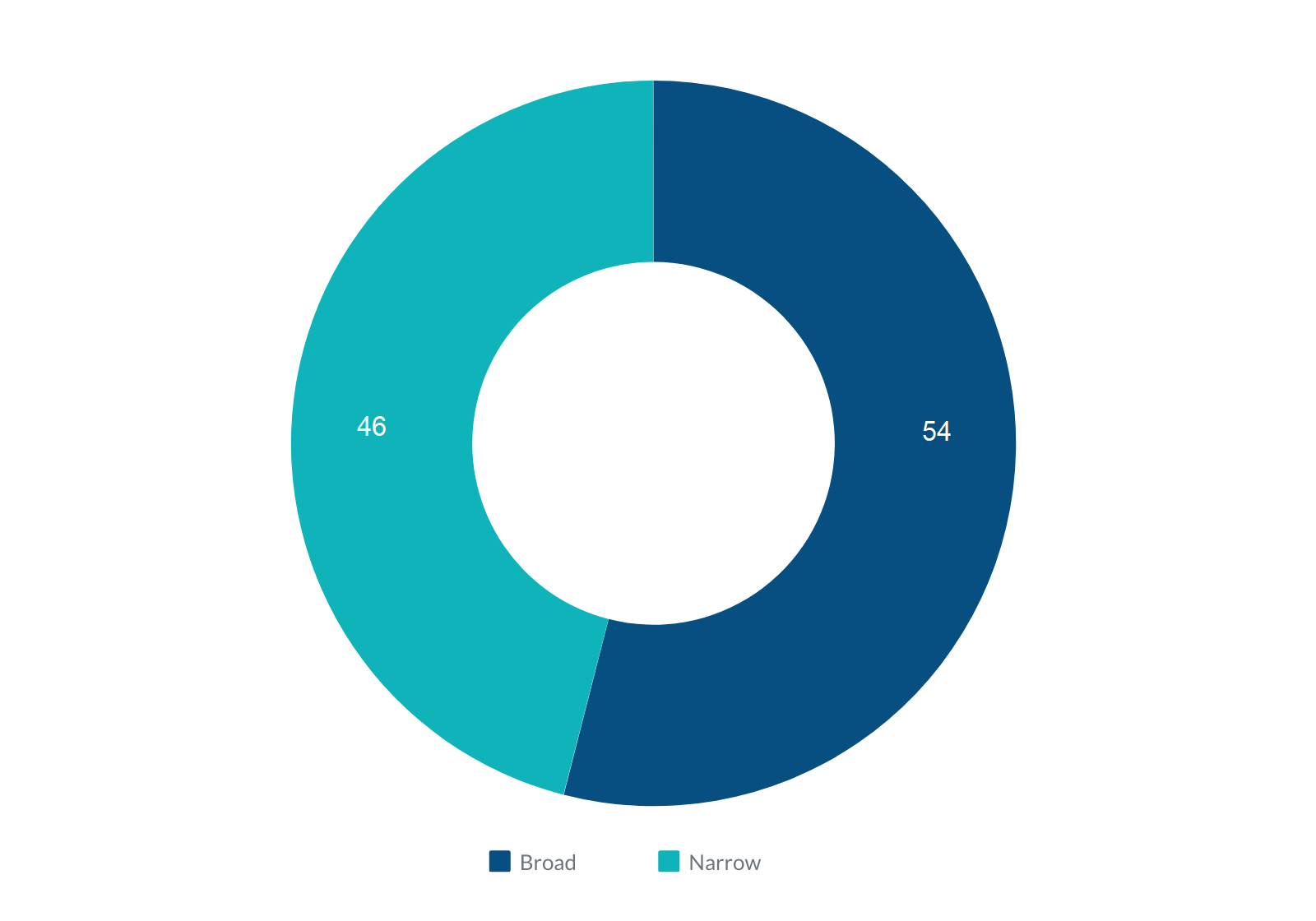 For the 54 data sets classified as broad, we include data sets that measure globalisation trends from the national perspective and shed light on countries’ interdependences, such as the IMF’s Direction of Trade Statistics, which tracks national trade flows and bilateral trade flows between states; or the Diplomatic Representation Data Set, which quantifies the diplomatic relations between states across time.  We also include datasets that contain countries’ data with global impact, e.g. the Joint Research Council’s Global Conflict Risk Index, which expresses the statistical risk of violent conflict in any given country in the next one to four years; the various UNHCR data sets tracking migration flows; and the IMF’s World Economic Outlook.

Most of these data sets report on a country/year level. This is unsurprising, as it reflects the long-dominant paradigm of the Westphalian nation-state as the most important unit of analysis. However, we argue that the drastic rise of global governance needs to be better reflected in the research body. In this light, it is a welcome finding that a growing number of data sets tries to capture phenomena beyond these two basic units, thus allowing for a more refined and granular picture of world politics.

From these 100 datasets, we classify 46 as narrow (by that, we mean data sets that are dealing explicitly with global governance phenomena). Amongst those narrow data sets, four different subcategories emerge, each quantifying a different feature relevant for the study of global governance dynamics. However, as our visual clearly shows, these features receive the same attention, suggestion promising avenues for future research. 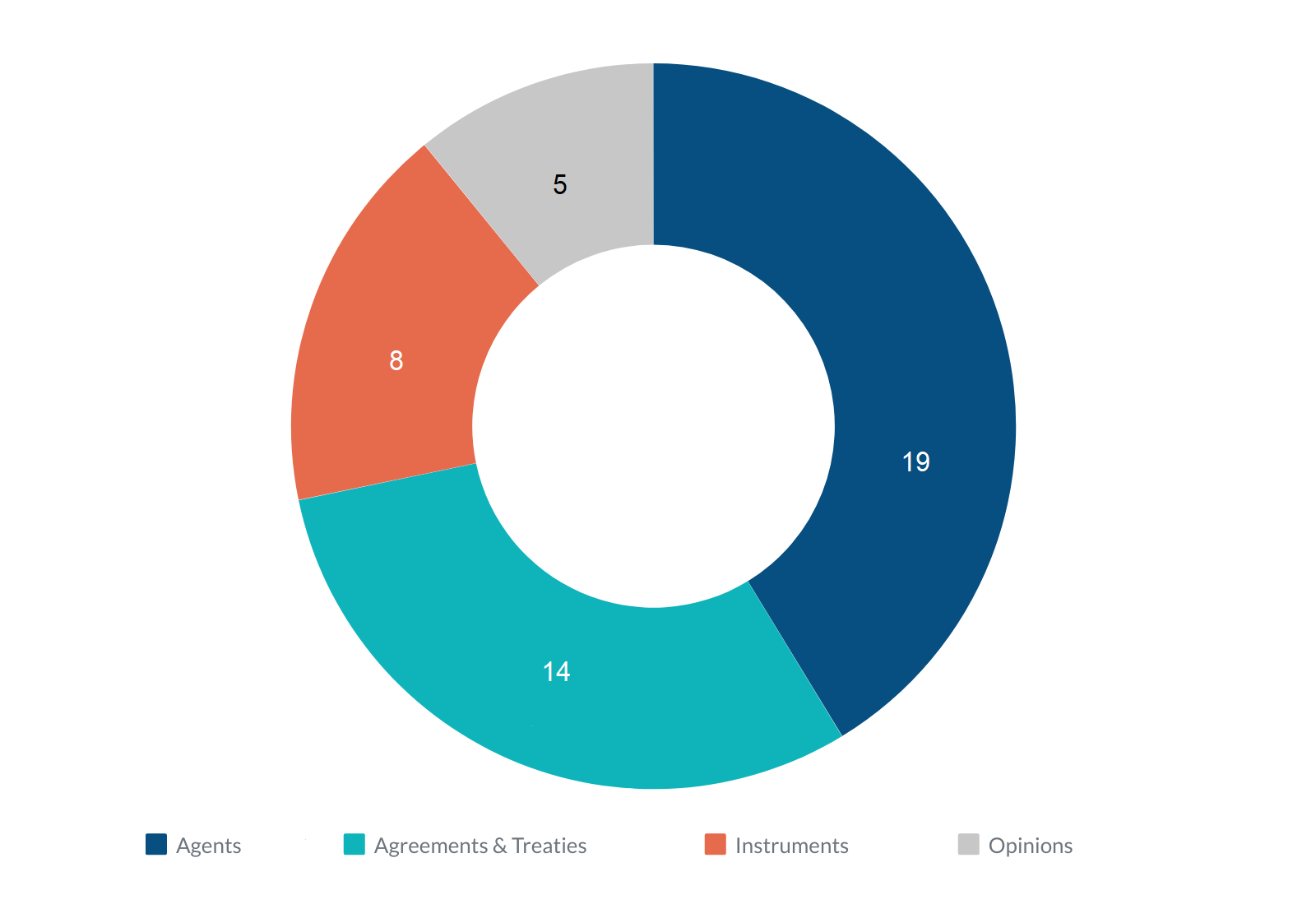 Figure 3: Distribution of data sets among scope and focus

Figure 3 demonstrates the dominance of the more traditional research focus on agents (especially IOs) and treaties, compared to more novel approaches that study instruments or opinions. While the study of IOs underwent some worthwhile innovations (e.g., the study of informal institutions, IOs’ openness, …), researchers increasingly turn to global governance aspects beyond IOs. Indeed, we would advocate more experimental research on such non-traditional forms of global governance, because they can greatly enrich our understanding of today’s complex and multi-stakeholder world politics.

Taking a different perspective, we assign the 19 data sets[1] on global governance agents to the four types of agents involved in global governance as identified by GLOBE. These are: supranational governance, transgovernmental networks, public-private partnerships and private governance. Each type of agent has different features, properties and capacities, and entails different political dynamics. As figure 4 shows, most of them deal with supranational governance (14 data sets on IOs). The relatively new research strands on transgovernmental networks (4), public-private partnerships (3) and private governance (2) are lately gaining more traction, but in comparison data availability is still quite scarce 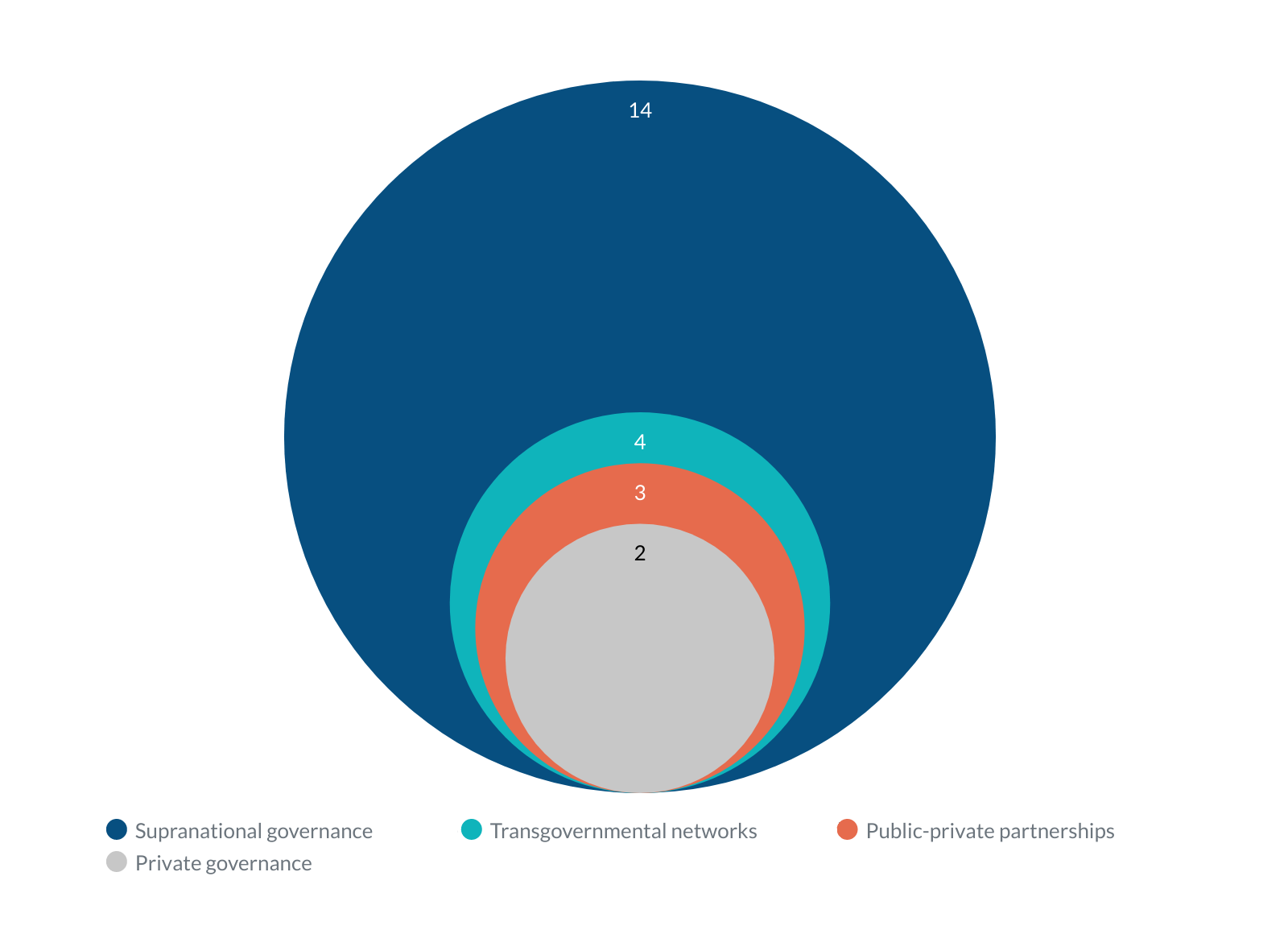 Figure 4: Distribution among agents of governance for the narrow data sets

Even if the GLOBE selection of data sets is very eclectic, our sample shows great variety in focus and scope. Nevertheless, this meta-comparison is a first promising step, which could allow for interesting avenues for future research.

By all accounts, geopolitics and international relations will continue to be largely driven by strong players who do not always act rationally or predictably. However, the complex interdependencies created by globalisation and the need for their smart management imply an increased role for nuanced, well-calibrated global governance mechanisms. These tend to be less erratic and can thus better be quantified and rigorously studied by researchers. The GLOBE Project will therefore continue to gather and promote relevant data sets, assist in the development and distribution of new ones, and call for increased attention by policy-makers and observers to the findings produced by global governance studies.

Jacint Jordana is the Director of Institut Barcelona d'Estudis Internacionals (IBEI) and Professor of Political Science and Public Administration at the Universitat Pompeu Fabra (UPF), Lewin Schmidt is a Predoctoral Fellow at IBEI within the framework of GLOBE Project and Predoctoral Fellow at Universitat Pompeu Fabra (UPF), and Adam Holesch is Project Manager at GLOBE Project and Research Fellow at Institut Barcelona d'Estudis Internacionals (IBEI).

[1] Some of them include different categories of agents and are therefore counted more than once.